You’ve likely been hearing that you should be providing “enrichment” for your dog. But if you’re just a little suspicious of all of the pricey things suddenly being marketed as dog enrichment toys and activities… you’re onto something!

True dog enrichment is indeed critical, but you can’t just whip out your credit card and cross “enrichment” off your to-do list. Even if your neighbor raves about a certain enrichment food puzzle or agility class, it may not provide any enrichment at all for your particular dog.

Here’s why: Canine enrichment is in the eye of the beholder, and not all dogs are the same. A little observation of your own furry friend will go a long way in helping you figure out great (and often free!) ways to provide effective enrichment.

Coming up with an enrichment plan for your dog starts with simple observation. That means that you should watch your dog first, then come up with a specific plan for enrichment activities. Is your dog digging in the yard? Chewing the furniture? Pulling on lead with his nose to the ground? Your dog’s behaviors can be the observational breadcrumbs that will lead you to effective enrichment – and a much happier dog.

Note what your dog tends to do, then experiment with objects, activities, or ways to rearrange the environment that might “scratch that itch.” Certain behaviors might suggest specific types of enrichment:

Enrichment for dogs who pull on leash

If your dog often pulls with her nose to the ground, she could have an unmet need for scenting. Experiment with enrichment activities such as:

Obviously, you also want to work toward more pleasant leash walks by finding the right harness and working on engagement – but if an unmet need for scenting has been a factor in the pulling, those efforts will be more successful after this targeted enrichment.

Enrichment ideas for dogs who counter-surf

If your dog is counter-surfing, he could have an unmet need for foraging. You could experiment with these enrichment activities:

To address counter-surfing, it is also important to stop leaving delicious things unsupervised on the counter! But for a dog who’s craving foraging, providing “legal” outlets can make him much less obnoxious around food in general.

Enrichment ideas for dogs who dig

Enrichment and How It Can Solve Many Animal Behavior Issues

Contrary to popular understanding, canine enrichment is not simply about providing something extra. It’s also not about exercise or boredom-busting, although it will likely provide those things, too. It’s about meeting your dog’s unique needs by offering ways to engage in natural, species-typical behaviors – behaviors that our modern way of life often does not allow. Canine enrichment helps dogs be dogs, solving many of our problems with their behavior along the way.

The concept of animal enrichment started in the 1970s, as zoos were starting to focus on conservation. Breeding was a newly important goal – and it was proving elusive. Some began to theorize that the reason animals weren’t procreating was because their daily life in captivity was too far from their norm in the wild. They weren’t behaviorally, emotionally, or physically healthy enough to breed.

Some zoos experimented with ways to come closer to meeting each animal’s natural needs. Out went the standard, bare-bones enclosures, and in flooded the perching areas, climbing vines, prey scents, hidden food, soundtracks of the wild, and more. The change brought dramatic success to breeding programs, as well as an “ah-ha” moment. A new zoo focus was born: using behavior to assess health and enrichment to improve it.

The pet dog world paid attention. Like the non-breeding zoo animals, pet dogs also show through their behavior – barking, chewing, anxiety, and more – that something is off. Behaviorists began to theorize that enrichment could make dogs more behaviorally sound, too. Rather than attempting to train the unwanted behavior out of the animal, they started looking at whether the dog’s needs were being met.

“When you don’t meet needs, you get maladaptive behaviors,” says Emily Strong, CDBC, SBA, co-author of Canine Enrichment for the Real World with Allie Bender, CDBC, CPDT-KA, SBA. Both are experts in training and behavior, and their authoritative book combines a rich scientific foundation with client-tested ideas to improve dogs’ lives.

“Enrichment often solves behavior problems,” says Bender. “When they have an issue, people assume they need a trainer, but nobody learns well when their needs aren’t being met. If the first step in a training plan is focused on meeting needs, sometimes the issues – jumping, barking, mouthing, digging, or whatever – simply go away.

Dog Enrichment as an Interesting Puzzle

The final part of the experiment is assessment: Is it really enrichment? You can only tell by watching your dog. Does he love it? Is he super engaged? Has it decreased the problem behavior that led you to try this? If the answers are yes, yes, and yes – that’s enrichment. But if he leaves that Kong half filled, or hides under your legs during that agility class, it’s not functioning as enrichment. Back to the drawing board!

Allie Bender, CDBC, CPDT-KA, SBA, and Emily Strong, CDBC, SBA, are co-authors of Canine Enrichment for the Real World: Making It Part of Your Dog’s Daily Life. They encourage owners to think of this process – discovering what natural canine needs are going unmet in your dog’s life – as a rewarding puzzle. Not only does meeting those needs make him happier and easier to live with, but also, as Bender says, “It’s way more fun to address these behavioral issues using enrichment rather than trying through training alone.”

Strong adds, “Thinking about enrichment flips the traditional mindset around dog behavior. Instead of thinking ‘What do I want the dog to do?’ we think ‘What does this dog need to do?’ Oddly, when you do that, you often end up solving the first question.” 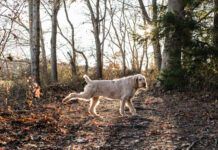 Why Do Dogs Kick Grass?

Can you (not!) dig it? What to do if your dog digs where you don’t want him to 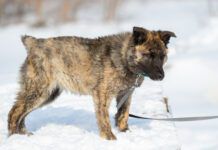 Boone Has Lost His Off-Leash Privileges

Nancy Kerns 5
I walk with my dogs in a number of locations in my local “wildlife area,” which consists of thousands of acres of land surrounding...