I read a recent article in The Atlantic about some scientists who taught rats to play hide-and-seek as part of a larger study about the neuroscience of play. I’m riveted by animal behavior, I’m a huge fan of play, and I find neuroscience interesting, so an article like this can send me straight down a rabbit hole of further reading, investigation, and thinking while gazing out the window.

The abstract of the study, which was originally published in the magazine Science, concludes, “The elaborate cognitive capacities for hide-and-seek in rats suggest that this game might be evolutionarily old.”

Animal behavior experts have long speculated about the purpose of play; it is thought to be a sort of behavioral practice time, when predator species practice stalking and hunting prey, and prey species practice escape tactics (such as running and dodging) and rudimentary self-defense behaviors such as kicking or biting. And of course, all species tend to engage in playful social behaviors, such as social grooming. The play of humans incorporates all of these things!

All mammals play the most when they are young, and most species spend less and less time playing as they mature. Interestingly, humans and dogs are two species who retain a greater than average interest in play well into their senior years, though the “games” may change greatly over time. This is why good dog trainers frequently recommend using play as a reinforcer for a dog’s behavior that the owner likes or wants more of. Mutually enjoyable play also helps strengthen the bond between dogs and their humans, and keeps them engaged and motivated to pay attention to and work with us.

Interestingly, hide-and-seek is a favorite game of many humans and their dogs, me and mine included. Both my dignified senior dog, Otto, and my always goofy, playful four-year-old Woody will leap to their feet and stare at me if I signal the start of a game by just looking at them and then pantomiming an exaggerated sneaking out of the room: Oh, it’s on! they seem to say. They know to wait for me to whistle before starting their search, without me having to tell them to “stay.” I never taught them this, but if they come and find me before I’m actually hidden, I just tell them, “Aw, you wrecked it!” and resume doing whatever it was that I was doing before I initiated the game. So they learned that if they wait for the whistle, I’m both more difficult to find and I almost always let out that inadvertent squeal of joy and surprise that humans almost can’t help but make when they are discovered hiding by their intensely seeking dogs. And then we all celebrate with laughter and a little bit of roughhousing.

Mutually enjoyable play is so reinforcing for most dogs, that I would hazard a guess that people who play with their dogs would rate their dogs’ behavior – or at the very least, the strength of their relationship – more highly than people who don’t play with their dogs. Shoot, if I were a scientist with time and money to spare, I’d try to find a way to test this hypothesis. Instead, I’ll just ask you guys: Do you play with your dogs? How and why? 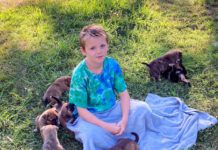 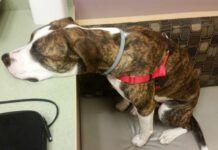 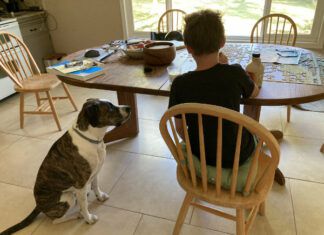 Nancy Kerns 12
Neither one of my dogs has ever been a beggar – haunting the kitchen or dining table, whining or nudging us in hopes of...