When you contact a massage practitioner about your dog, one of the first questions she should ask you is whether and when your dog has been seen by your veterinarian. Be wary of any practitioner who would work on your animal with an illness or injury if you haven’t at least tried to get a medical diagnosis. Because of massage’s powerful pain-relieving effects, doing massage first could delay important medical treatment.

Another thing to watch closely is how the practitioner interacts with your animal. Any attempt to forcibly restrain the dog is a red flag. Massage works closely with the parasympathetic nervous system – the opposite of fight or flight – and anything that counters that relaxation effect will undermine results. Be proactive, and end any session if you feel the practitioner isn’t respecting your dog.

One of my instructors, Lisa Ruthig, told me about a dog she worked on who was prone to behaving aggressively when her neck was touched. The dog had been diagnosed with intervertebral disc disease (IVDD) and was in serious pain. Lisa learned that the dog had been muzzled and forced to endure deep-tissue neck massage from another practitioner.

Lisa used behavioral desensitization coupled with massage to the rest of the body to overcome the dog’s fear. In the end, the dog didn’t need deep tissue massage to relax her tight neck – and deep masssage is contraindicated with IVDD! Instead, Lisa used light massage and myofascial release, which the dog happily accepted. Giving dogs some choice and control over a session is the most humane, fastest way to build a bond of trust and allow the necessary work. 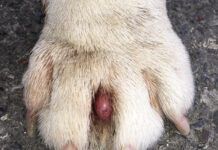 Why Do Dogs Shiver?

Snow Nose on Dogs Is Real