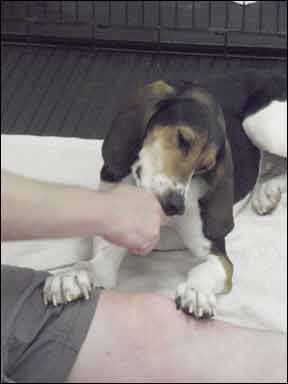 Nail-trimming used to be so simple. You found a stalwart friend or family member to restrain your dog tightly while you quickly clipped his nails in spite of his struggles, trying not to “quick” him (by cutting a nail too short and making it bleed), which made him struggle harder each time. If you ran out of stalwart friends, you started dropping your dog off at your vet’s office for nail clipping – out of sight, out of mind! He came back seemingly none the worse for wear – until your vet told you that they would need to start sedating him to trim his nails, after he tried to bite one of the techs. Hmm . . . maybe not so simple after all.

For owners and trainers who have come to value relationships with dogs that are based on cooperation rather than coercion, forcible-restraint nail-trims are a thing of the past. Muscle-power has given way to brain-power as the primary tool for clipping canine nails. Our job, as humans who choose to live our lives in peaceful partnership with our dogs, is to make creative use of our grey matter to figure out how to get our canine companions to enjoy nail trimming – or at least to be relaxed and cooperative about it.

When positive reinforcement was new to the dog training world, we hadn’t yet gotten creative with the nail-trimming challenge; we almost always used counter-conditioning to convince the dog that nail trimming was a good thing. Since then, smart trainers have come up with new ideas; these days there’s even less justification for manhandling your dog into submission for his pedicure. At my spring 2012 Peaceable Paws Behavior Modification Academy, trainers implemented three distinctly different methods to help their dogs overcome an aversion to nail trimming. Check them out!

There is nothing wrong with using this old standby to help your dog love a pedicure. It’s the method selected by Academy trainer Valerie Balwanz of the Dogg House, Charlottesville, Virginia, for her Beagle-mix, Trixie.

Classical conditioning, also called Pavlovian conditioning, is a long-established principle of behavior science: creating an association between two stimuli in order to affect behavior. Many dogs are classically conditioned to dislike nail trimming, thanks to the scary restraint and accidental nail-quicking.

Counter-conditioning pairs nail trimming with one or more things your dog loves, so he comes to associate the procedure with good things instead of bad. A counter-conditioning protocol might start with simply picking up the clippers (or grinder) in one hand and feeding the dog a very high value treat from the other – and this is repeated until the act of picking up the clipper makes your dog’s tail wag and eyes light up as he searches for the expected goodie. You gradually move the clipper toward the dog, eventually touching him with it, all the while working to maintain the positive association: nail clipper/grinder makes really good stuff happen!

A separate, equally important procedure includes conditioning the dog to love having you touch (and eventually hold) his paw. Finally, you put the two together – the now-beloved clippers touch the now-comfortably-held paw – and eventually, a nail is clipped. See “A Counter-Conditioning Protocol for Trimming Your Dog’s Nails” for more details.

Valerie used counter-conditioning with Trixie, who had long been sensitive to having her paws touched. By Day 5 of the Academy, Trixie was offering her paw to be held, and gaining a positive association with the clippers. Valerie continued with her training, and reports that she is now trimming Trixie’s nails with ease.

Somewhere along the line, dog people decided it was necessary to hold a dog’s paw securely (tightly) in order to trim the nails. But it really isn’t so. You can teach your dog to voluntarily offer a paw and hold it still for trimming – and avoid having to counter-condition the restraint part of the procedure. (Of course, you still have to condition your dog to love the nail trimmer or grinder).

This was the method selected by Academy trainer Steve Buckmann of Bloomington, Indiana, with his foster dog Apple, a lovely young hound. Steve sat on the floor next to Apple, and used “shaping” (reinforcing small pieces of the behavior to build the complete behavior) to teach her to place her paws on his leg. In that position her nails were easy to clip. By Day 5 of the Academy, Steve was happily and carefully clipping his cooperative dog’s nails.

This is also the method I use with my Corgi, Lucy, who used to hate the sight of the clippers. I used counter-conditioning to help Lucy overcome her strong dislike of being touched on her legs and body. After we had completed her paw/nail clipper-touch protocol, I did the following:

– Told Lucy to “Down” and “Wait.” (When she lies down her nails are more accessible than when she sits.)

–Placed a yummy treat 12 inches in front of her nose.

–Told her “Take it!” so she could jump up and eat the treat.

–Repeated the previous steps for the next nail.

She now adores the nail clipping procedure, and I clip multiple nails in between “Take it!” cues, always keeping it random so she never knows which nail clip will result in the “Take it!” cue.

Perhaps your dog truly hates the nail clippers, a grinder sends him trembling under the bed, and he’d prefer you leave his paws alone, thank you. You may want to select a nail-trimming procedure that requires neither restraint nor clippers by teaching him to file his own nails.

Positive trainer M. Shirley Chong of Grinnell, Iowa, suggests this method: Teach your dog to paw at a sandpaper-covered board to file his own nails. Shaping a dog to file his own front paws is pretty simple. I had already done this procedure with my Scorgidoodle, Bonnie, who loves shaping games and hated nail trimming, despite lots of counter-conditioning work.

Bonnie quickly became quite adept at filing her own front nails, but I had never pursued shaping a scraping behavior with her hind paws. Academy student Gina Burger, of Carthage, Missouri,  elected to try this with Bonnie.

It proved to be a challenge. If your dog scrapes his hind paws on the ground after eliminating, you can capture the behavior with a click and treat as he scrapes. Bonnie doesn’t scrape.

She was, however, happily willing to move her hind feet in all sorts of ways. Gina tried putting emery boards flat on the floor, and then at various angles to try to elicit even a tiny scraping motion. The scrape proved to be elusive. Gina tried getting Bonnie to back up and then move forward. She tried clicking Bonnie for moving sideways, and reinforcing her for moving straight. The week ended without success for the hind-foot nail-filing project. (Gina did, however, pass the course!)

I have since reconsidered the exercise. In my own shaping sessions with Bonnie, I’ve determined that an actual “scrape” isn’t necessary – just movement that occurs while the nail is in contact with the abrasive paper. Bonnie moves side-to-side, wagging her tail and filing her nails in the process. Success!

Pat Miller, CBCC-KA, CPDT-KA, is WDJ’s Training Editor. She lives in Fairplay, Maryland, site of her Peaceable Paws training center, where she offers dog training classes and courses for trainers. Pat is also author of many books on positive training. 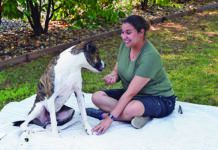 A Counter-Conditioning Protocol for Nail Trimming 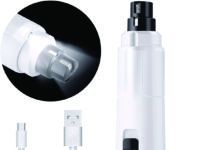 What’s The Best Grinding Tool For Your Dog’s Nails? 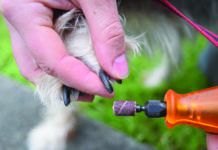 Grinders vs. Clippers: What’s Best for your Dog’s Nails?